The book has not been transleted 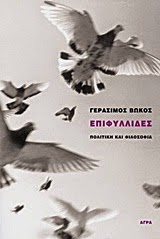 “Fifty-two serials, a puzzle of thoughts derived from texts from the past, a thought for today’s world, a comment on the current affairs. The speech is simple and familiar with sarcasm, elegance and depth. The collage of titles, one galaxy of stars on the black canvas of everyday life. Then and now”.

Christina Voumvouraki
"It's a collection of reversed literary tales".

Kleopatra Tsakouri
“I believe that Gerasimo’s Voko’s small stories (serials) are pleasant, useful and help the reader (as they helped me) to learn things that were unknown before and to confirm knowledge and values already known, and by reading them in this book, the reader feels greater satisfaction".

George Kalientzidis
“The most important thing is the way that Gerasimos Vokos  organizes this meeting. Plain and easy to read, even for the most difficult philosophy meanings”.

Stefania Veldemiri
“The texts were easy to read and comprehendible, meaning that, even though I was not familiar with the subject, I understood the gist of it or at least I think I did”.

Christina.Kelesidou
“He talks about Marx and the loan policy, the pillage of the state, the role of the stock market, with the economic and governmental factors that evoke abrupt value fluctuations resulting in the catastrophe of the small capitalists, and the enrichment - with astronomical speed - of the big speculators - does this sound familiar?”