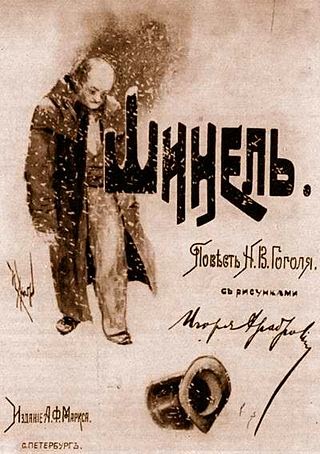 Violeta Papadopoulou
Nikolai Vasilevich Gogol lived around the same time as L.Tolstoi. His origin was petty and his work was influenced by his work as a civil servant, which ended ingloriously with his resignation because of the frustration of the bureaucratic public administration. He died nearly  as crazy, and his work has continued references to ghosts and goblins.
He criticizes the wrongs, with sarcasm and humor that reaches the limits of hyperbole, just to emphasize the absurdity of situations. His work has been influenced by Pushkin.
All these are reflected in the "Diary of a crazy'' and the ''Bii'','' Nose'' and ''Trolley'', in short stories included in the same book with the Coat.
Especially in the Coat, the narrative makes us empathize with the Akaki Akakievits, a humble understrapper civil servant, who lives poorly, without having enough money even to buy a new coat. He ultimately succeeds to buy one, after superhuman efforts and sacrifices, but at the end someone takes it from him! The book leaves us with  sadness and an outrage to all the needy and unfortunate people who dream and try to do something so simple and at the same time, the conditions makes it inaccessible, that when they win and eventually lose it, they lose together their mind and their own lives.
Any particular authority  is hardest and ruthless.

Pavlos Nerangis
Akaki a poor clergyman, an insignificant, worthless for other people,  not raising the interest of anyone, who is the personification of fatigue, lack of anonymity. Until he, Akaki, referring to not-bad, the kind, generous, the defenseless man (remember Idiot of Dostoevsky) becomes important wearing a coat, a coat that acquires much effort and thanks to which gathers suddenly everyone's attention. The pleasure lasts, however, only 24 hours since  Akaki is stolen. The Overcoat is lost resulting in a first phase to be lost in the meanders of the Russian bureaucracy and then losing his life.
Reading the book everyone can understand that Akaki is not a figure only at the time, but any time and much more modern. Suffice coat replaced with a villa, a luxury car, a yacht, etc. Yesterday at Porto Karras I met a Romanian Akaki.
Gogol criticizes eloquently the emptiness of his day or rather the emptiness of the ruling class of his time, although he is conservative and deeply bigot. In light of this criticism of the look, his approach has a mood of release, expansion and introspection, aversion from the "bad" mundane.
Reading the book, when mentioning bureaucracy, several times it refers to "History of an anonymous man" downstream Anton Chekhov. The narrative of Gogol is very good, with dominant elements irony and comedy, language is understood thanks to good translation of George Tsaknia but the play ends with an admittedly surprise: the resurrection of the protagonist. Akaki Akakievits resurrected to avenge the unjust death, and the unjust life. And here there is a contradiction. While the whole narrative is characterized by a pragmatism, the end of the narrative goes back into the realm of fantasy. Perhaps because of the bigotry of the author.

Archondoula Diavati
The tragedy of an insignificant man. The man for errands, frustrated, stuck in the state apparatus which squeezes employees. Humble, receives contempt senior and junior, copy documents and is  happy, returning home tired without looking for another fun, despite supposedly remembers what documents would have the chance to copy the other day. Clerk at Ministry Gogol has many images to copy. The Martelmpy of Melville and Karyotakis and Kafka beckon us, descendants of a good writer. Dostoyevsky himself has written ''That all of us descend from Gogol's overcoat ?'' Realistic prose which brought us the great authors like, Tolstoi,Dostoyevskiy and Tourgeniev.
A person of Christian chastity and love (I'm your brother), like Akaki Akakievits becomes a catalyst for change through the new colleague and initially went to imitate the older, those in the system mocked and scorned. But the coat that came to replace the old  was the dream that dared to do and yet he fought and eventually succeeded. This gave him strength and joy. The dream was a new coat that changed the social status, but a dream became a nightmare when he was stolen after distressing incidents, which implicated him in hideous pinions of the Russian bureaucracy and led him to death, but not to the end. The end is grotesquely funny and tragic.  Akaki Akakievits becomes ghost retaliated posthumously terrorizing the city, stealing coats from aristocracy. If someday the people wanted...

Kleopatra Tsakouri
Gogol's Coat is a living history written in a few pages, which touches deeply the reader, and the most basic queries.
The author narrates both realistically and with obvious sense of humor, life and adventure of poor hassle civil servant, with the symbolic name Akaki Akakievits Tsarouchof. You feel that you live and you with him his pain, sorrow, hunger. His life changes, gets value when he wins the coveted coat. It is the personal revolution !!!
The theft of the coat, which he enjoyed just one day, resulted the end of his life. The story gets metaphysical character, when after the death of Akaki thieves  with his appearance, steal the coat of residents of St. Petersburg and bring fear and terror in the region. The comforting, really human, is the change of auditor  to  the employees. He became more correct, without conceit, showing remorse for the indifference shown by Akaki Tsarouchof, when he reported the theft of his coat and did not help him.
A small masterpiece !!!

Dina Papadopoulou
It could be a caricature of modern life, always modern and subversive. We  recognize in the descriptions of the small man that few can discern behind all behavior of humility and kindness.
The ruthless behavior of young colleagues the only cause was a single sentence "Leave me then! What have I done to you?''
But it was a phrase that led to his new colleague a blow to heart and changed over the world ... like a supernatural forced him to withdraw from his colleagues, who had considered at first people with good upbringing. Some time later, in the most joyful moments, seeing the clerk with the bald forehead and listening to the heartbreaking words "Leave me then! What have I done to you? "Within the aching  words resounded other:" I am your brother! "Then the poor young guy  draped over his face many times during his life, shuddered seeing how much inhumanity is hidden in a man, finding what vulgar wilderness lies beneath the polite ways, yet, oh my God, and those that the world considers to honest people ...
Akakievits through  everyday cruelty, he managed to touch the sensitive part of the soul of some people, like the young colleague and his superior, who gave the biggest amount than expected, and the colleague, who organized a party in his honorable new coat. He even  provoked feelings resembling guilt and remorse to the "important person" for the heartless behavior towards him.
The end is grotesque, with the appearance of the ghost of Akaki Akakievits be retaliated by stealing coats, and it is an apotheosis which becomes even more impressive if you consider that the reality surpassed imagination, when after 90 years, opening the coffin of Gogol, a headless body was found !!!
Αναρτήθηκε από Λέσχη Ανάγνωσης της ΕΡΤ3 στις 07:48