Hlias Papadimitrakopoulos, "The obolus and other stories" / Our readings (2nt year)


A suggestion of Maria Dontsi
* The book has not been translated 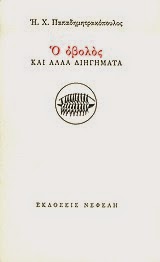 Christiana Vellou
I did know the author, Maria Dontsi gave me a DVD with footage from the show “Backstage” from channel ERT directed by L.Xanthopoulou and I started to get to know him. I was moved by Mr.Papadimitrakopoulos in the film, and he moved me as a writer through the book with the 12 short stories. He uses good old type writing, although simple and unadorned but also full of images, memories, morals and dignity.


Its has been many years since I read a text so beautifully "Greek". It looks like we have forgotten the richness of our language.


Maria Triandafyllidou
Reading this book was like a sweet comeback in old times when the spirits and tones sucked greedily the words and the stories ... where the characters were people who came alive in our eyes and continued to live beyond the lines…


In the year 1999 the American, without speech, talking about the exile, loneliness, deprivation, and relationships ...


The memory flies, diminishes, wears short trousers and applauding Nick recites the "Matrozo"! He Laughs intriguingly ... "hey Karagiozis ! the "Hymn to Freedom" is Archaic eightsyllabus "... memories of 2003! Oh Mr Elias, you were cheeky like all of us, in your youth, how elaborately you painted asmile in our eyes! ...


and as we are drifted by the memories ... Flox is being transformed into Ruda, Belka, sir ... Oh Mr. Papadimitrakopoulos, you scared us ... the headless Flox and all those  rabies injections in the abdomen, joker ... Mr Elias in 2001 ...


I remember I had a ‘Helium’ balloon, once, and it slipped, and left, and became a small dot in the sky, and vanished, and I was looking for it trying not to cry, because the balloon was expensive ... and it was my fault that it slipped from my hand... ah ... Mr Elias what did you remind me of now ... but "now we have this here ..." and a child sleeps happily hugging a big blue balloon.


Your tender your words made me relive my childhood.


Stefania Veldemiri
I read it in one go, with great concentration. As I read it I am there with it, do not leave it for a minute. Finally I come the words: pure, true, sweet, tender, sad, memories, feel, remember, laugh, gray -pencil and a feeling that I love, a sense that I know nothing. The texts are small stabs or short hugs. Or both. My favorite is "Balloons", because I love them too much. I love them for the air they hold inside them , which always but always escapes. I liked that the balloon mania became a gift. And the boy who slept hugging this gift with some air hug. I feel babbler, I said a lot, I think so. Oops it was only 5 rows ...


Christina Voumvouraki
Maybe it would be better if I did not write anything.
Maybe it would be better if I put my warm coat, with by pajama bottom, and leaving behind me the door slightly open, to dive into the cold darkness • and the cold darkness into me.
I should go and find a sloping alley. Climb up and down, up and down, up and down. And so you spend hours and days and years, and I will patiently harvest with my steps my field which was once undefined, right there.
And when it comes down to the asphalt eventually I will find soft soil, I will gather the labors and pains of people, and will pour triumphantly in the air and then I'm going to play hide and seek with the carefree children of the neighborhood.