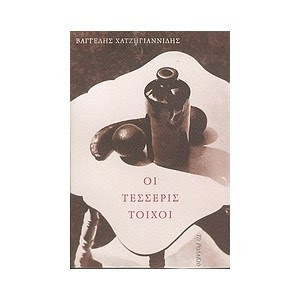 Extracts of book reviews
translated by
Christiana Vellou
Pavlos Nerantzis
I was impressed by the plot, the author’s narrative which is simple, yet not at all tiresome. The author has a revolutionary, cinematic script. From the very first pages, everything flows in a sequence reminiscent of a film noir, both in terms of the evolution of events and because of the characters’ cynicism.

The author pays, indeed, no attention to time. Time is not defined. The same can be said for the place, despite the fact that the book title refers to "four walls", i.e. to a house or even better, to a house’s room.

The house could be anywhere in the Mediterranean, in a country producing honey. Reading the book I imagined the house to be in an island of the East Aegean Sea (Lesvos, Chios, Samos), but it could also be, just like the heroes, somewhere in Malta or Sicily.
The only defining feature of the house is that it is located at the outskirts of a small town, a village. Hence, a double isolation for our heroes- in an island and even more so, in a place far away from man's sight. And it is exactly these heroes, the characters they embody, who impress, who attract the reader.

The reality of P.Rodakis is tumbled by his hallucinations, which he has had since he was a young boy. Hallucinations, which even though did stop, they were then turned into fears when an unknown woman arrived. It seems that Rodakis has experienced everything. He came from a rich family, travelled when his father died- even if not for long- but nevertheless all around the world. Although he experienced all these superficially, he doesn't feel the need to move around nor to create relations. He is more interested in his relationship with objects, objects which are scattered and hidden around his house.

Of the finest points of the book (pages 42-43), is how he sees the trip… For me, the trip is an extension of the place, since you can't possibly extend time. The trip is an implicit answer to the inevitable forthcoming death. For Rodakis, the trip is the past, it's only memories.

On the other side of Rodakis, we find Vayia. In the reality of this heroine, a heroin of unknown origin- at the beginning I thought that she might be a refugee, which in principle resembles a ghost, dominates a desire.

Both of them live in the four walls of a house, as in a film noir. However, the romantic element is missing, the element which is usually the second characteristic of this type of film.

Their lives move together. In the beginning they are strangers living in the same place, then they approach each other like wild beasts. They observe each other from the key whole.
Suspicion and curiosity are evident, until they decide to develop a joint plan, to set a common goal-to make honey, the best honey in the world.

To be continued in the pages of the book...
Αναρτήθηκε από Λέσχη Ανάγνωσης της ΕΡΤ3 στις 08:33